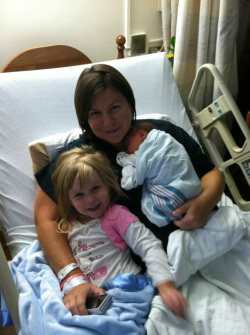 Kaden’s story starts on August 3, 2011 at 9:25am. I had gone into labor 4 weeks early, but he was absolutely perfect and healthy. From the start he was a dream baby, quiet, ate well, and barely made a peep. His big sister, Paige, absolutely adored him. We were complete as a family.
By his first week check-up he was gaining weight and doing great. However, less than a week later, Kaden seemed to develop a cold. Our pediatrician was not concerned. He was sneezing and boogery but he was eating and acting fine. If it got worse we should come back. Over the next week, the sneezing subsided, but the mucus remained. He was about 3 weeks old when he developed the cough. It was a Sunday, his doctor’s office was closed. He had coughing fits but he didn’t appear to be struggling to breathe. The next day we called the doctor’s office bright and early, but they didn’t have any openings. His cough had subsided some but he didn’t seem his normal self. We watched over him throughout the day. That night we decided to bring him to the ER. His breathing had begun to alarm us. I held him in the car rather than strap him in the carrier. At one point I was not sure he was breathing, but then he made a wheezing sound. When I ran through the doors of the ER, he was limp and barely breathing. They laid him on a table to be assessed when he stopped breathing altogether. All of a sudden the nurse started calling for help and 6 or 7 people rushed past me. I remember looking at my husband, Matt, who was holding our 3 yr old daughter. The look of terror in her eyes snapped me out of shock. At the same time Matt realized she didn’t need to see her baby brother being intubated. Kaden was stabilized and put on a ventilator. I can still remember thinking that we would all be going home that day. They would fix him and everything would be fine. 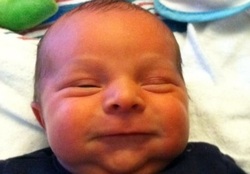 Later that morning Kaden was transferred to the PICU in Advocate Hope Children’s Hospital. He was put in an isolation room in which everyone had to wear gloves, a mask and a gown. Here they began him on antibiotics after a chest x-ray showed mucus build-up in his lungs. They swabbed his nose and drew blood and told us they would get the results in 2 days. Meanwhile, Matt and I took turns sitting by his side and sleeping when we could. Our families tended to our daughter at home. Two days passed and the diagnosis was in. Kaden had contracted Pertussis, or Whooping Cough. We had heard of it but didn’t know much about the effects on infants. The following Sunday, the attending doctor sat us down to discuss Kaden’s condition. His white blood cell count was nearing 90,000 and his right lung was partially collapsed. His left ventricle was enlarged as well. We didn’t have many options. The doctor suggested to put Kaden on a machine that would bypass his heart and lungs. This would give his heart and lungs a chance to heal. It was this or nothing. That day, we left the hospital and went straight to our church. Kaden was baptized that night, just hours before he underwent his procedure. For several days Kaden progressed well. His white blood cell count had gone down to about 3,000, his lungs were clearing up and his left ventricle was back to normal size. The surgical team was talking about weaning him from the machine. Our hopes were high. 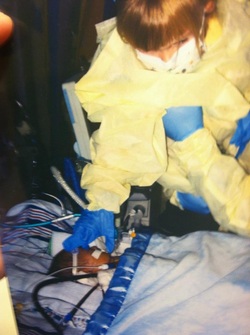 I had gone home to spend some time with our daughter when my husband called from the hospital in a panic. One of Kaden’s lungs had collapsed. By the time I got to the hospital, his other lung had also collapsed. Kaden underwent another procedure to place chest tubes in his lungs. We anxiously awaited the next few days for his lungs to recover. His right lung, however was still collapsed and now the team suspected that he had fluid around his heart and lungs. Again he underwent a procedure to try to drain the fluid. After the procedure, Kaden had several seizures during the night.
The next morning, we sat in on rounds. Kaden’s right lung had not gotten any better, the tissue was dying and his seizures were continuing. He had stopped responding to any stimulus. Kaden had fought long and hard enough for us. The nurses had told us we would feel it when it was time, and we did, all the way from the tips of our toes to the tips of our noses and in the depths of our hearts. We gathered as much of our family together in Kaden’s tiny room, which at this point was crammed with his hospital crib, the heart and lung bypass machine, a dialysis machine and two ventilators. My husband and I took turns holding Kaden for our families. I held Kaden in my arms for the last time as Matt kissed his head behind closed curtains. It was the first time since he entered the hospital that we were able to touch him skin to skin. As he took his last breaths, we whispered “We love you, we are so proud of you” and “It’s okay to go now”. It was after seven when we gathered our things and walked out of the PICU holding his blanket, diaper bag, a cast of his hand and foot, and a few locks of his hair. Our lives forever changed.

Kaden's Law is in the works for the state of Illinois!

"We are asking for Kaden's Law. We ask that a new requirement be created to require the State Department of Health to send out a Public Health Warning Notice, in the form of a low cost post card should be sent to all households, businesses and Post Office Boxes in the affected area. This should happen as soon as any reportable communicable disease reaches the epidemic threshold, which is predetermined by the state Department of Health, in conjunction with the CDC."
Change.org|How to Start a Petition