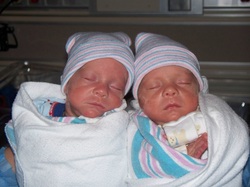 In May 2009 I found out I was pregnant, as a young mom I was terrified, excited, nervous and just about every emotion anyone could ever feel when finding out such life changing news. When I found out I was pregnant with twin boys, my nervous doubled as did everything else in my life. My nerves became reality when I went into labor three months early and I delivered two premature boys. Collin was born first at 2lbs 2oz. and Corbin was 3 minutes later at 1lb 15oz. We watched them struggle in the NICU everyday for 2 months, some days not even being able to touch them, so I was excited to be able to take them home and give them the love I was so desperate to give them the moment they were born. 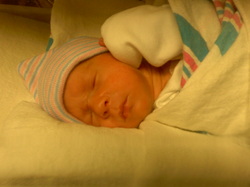 We brought Collin home first and almost a week later we got to reunite the boys and start a life I was anticipating from the moment I found out I was having twin boys. We attended pediatrician appointments, eye exams, and had a nurse come to the house every week to check on the boys to make sure they were growing and healthy. I thought I was doing everything right.

One month after we left the NICU, Collin started showing symptoms of a cold, knowing what we had learned from the NICU, we took all the precautions of dealing with one being sick. We took him to the doctor many times over the week updating him on every new symptom, making many phone calls to NICU nurses and doctors, many assuring us to give it time and he would be able to fight the cold on his own. But something didn’t seem right to me, his coughing fits would last forever leaving him blue in the face occasionally which would really scare me, but I was time and time again convinced I was being one of those over paranoid moms that freaks out over nothing. 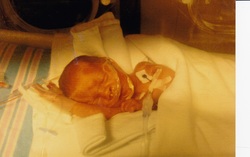 On the sixth day of his cough our worst nightmare had come true; our baby Collin stopped breathing at home, just 4 hours after leaving the doctor’s office. After many rounds of CPR the EMS picked him up and we watched for the next 4 hours as the hospital staff attempted to stabilize our son, after no success they had to send a team of PICU nurses from Children’s Hospital of Michigan to try to stabilize him so he would survive the drive.

When we arrived at the PICU they assured us they would find out what was wrong and why he was so sick, and they would start weaning him off the ventilator as soon as they felt he was able to handle breathing on his own. Experiencing what we had gone through having them early, we were familiar with all the machines and terminology, which gave me some comfort in a terrible situation. I have seen the amazing things they can do in hospitals and I never imagined what was going to come.

After two days and many tests they still did not know what was wrong, and before they could figure it out Collin passed away. It was devastating losing our baby boy, but it was also devastating not having any explanation. They had no idea what had taken him so suddenly, even after an autopsy there was so reasonable cause of death. 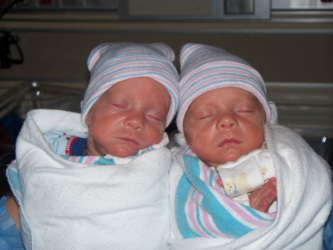 Two days after Collins funeral, just when we thought the nightmare was over we started to relive the worse week of our life. Corbin started to cough. We knew we didn’t have much time considering whatever Collin had taken his life in one week’s time. We took him straight to the hospital where Collin died so they could piece the puzzle together if possible to save Corbin. It was there in the ER where they took a nasal swab and I heard the word pertussis for the first time. Five days later it came back positive and I knew this was the disease that killed my first son.
I was terrified, every day I sat with my Corbin and watched him struggle to catch his breath. I was convinced he was going to die. When I would ask the doctors if he was going to die they couldn’t answer, I had given up all hope. They had treated him with antibiotics so aggressively but weren’t sure if they would conquer the disease because pertussis causes death in infants. Me and my family received TDap vaccines and were advised to make sure everyone that came in contact with my son or any babies were completely vaccinated. I was shocked to learn you can carry the disease for up to 2 weeks with showing absolutely no symptoms passing it to loved ones and those vulnerable. 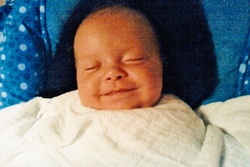 Because Collin wasn’t a confirmed case when he died they had to send all of his lung cultures from the autopsy to Washington D.C. to retest them to get an actual cause of death. Two weeks later it also came back positive and it was a blessing to have an explanation, but the reality was I had another baby fighting for his life with the same disease. I thought everyday was my last with Corbin and cried every day. By some miracle he beat the odds and 2 months after he was diagnosed, I got to bring him home for the second time. He survived this disease and is now a healthy toddler; I am lucky and truly believe that Corbin now has a guardian angel.  With Corbin we are lucky we started an aggressive treatment so early on, many unfortunately don’t get the treatment early enough and are uneducated about preventing it from even happening, like I was. I did do everything right but the one thing I didn’t do was make sure I, and anyone that was going to be in contact with my babies was up to date with all their vaccines to protect them from getting sick. It is the best thing you can do for them.


We are asking a law be created to warn citizens if there is an epidemic in their area, we didn't know, we couldn't do anything because we weren't told it was there. How can we keep our children safe if the Department of Health doesn't warn us there is a communicable disease at epidemic levels in our community? Please break their silence and sign Collin's Petition below and share with your friends!